Man Shot 11 Times By 2 Hitmen On A Bicycle

Ecuador, A man, A.L.P, 35, was killed yesterday afternoon with more than 10 shots after two subjects, who were traveling on a motorcycle, intercepted Á.L, who was driving an SUV-type vehicle.
The victim was accompanied by three people, his wife M.P.A. and 2 kids. One child got injured by a bullet at the height of the chest and another in the arm.
According to preliminary information provided by the National Police, 11 bullet impacts ended the life of the man, however residents of the sector claim to have heard around 20 detonations.
The deceased had barely parked his vehicle on the side of the street when the two hit men approached him through his window.
This new violent event shocked the inhabitants of the area. Criminalistics personnel went to the scene to lift the body and collect evidence 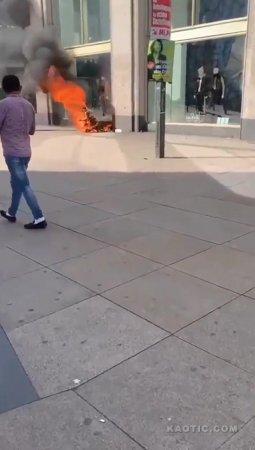 An Exhibition Of Executed Criminals.

A Man Lying On The Grass Was Stabbed At Least 15 Times With A ...

Just A Couple Of Dead Niggas